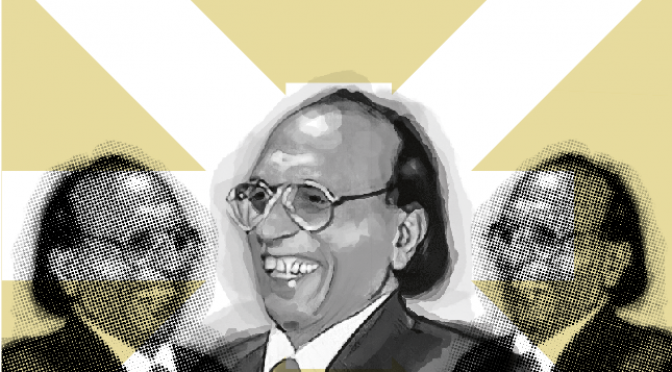 Dusk was slowly tiptoeing and the zephyr gently swaying the gulmohar tree. Adeebah didi (as an older sister is referred to in Hindi), our landlord’s granddaughter, who I looked up to as my mentor then, was explaining to me an English poem from my intermediate (Grade12) book. It was either Sarojini Naidu’s The Palanquin Bearers or P.B. Shelley’s Stanzas Written In Dejection Near Naples. The year was 1987 or early 1988 in Lucknow.

We sat on chairs put out in the verandah, facing the well-manicured lawn. There was a soft rattle on the gate. Two men stood there asking directions to a building, which didi knew about. She guided them. “Shukriya (thank you)”, the duo said as they left. As soon as they did, didi threw up a poser at me: “Wasn’t that Bashir Badr sahab, the shayar (poet)?” I was baffled. Just out of high school, with scarce knowledge of Urdu poetry, the name sounded alien to me. Didi said: “Please chase him and tell him Dadaji [the landlord] wants to meet him.”

After a 200-metre dash, I caught up with them. Having no idea who Badr was between the two, in my huff and puff, I could merely manage: “Dadaji, Bashir Badr Sir se milna chahte hain.” (Dadaji wishes to meet Bashir Badr.)
Badr gave me a calm, poised look and said: “Unse kahiyega, hum aadhe ghante mein ayenge.” (Tell him, we will be there in half-an-hourP.

After an hour, Badr and his friend turned up at the door. The first thing he told Dadaji was: “Mauf kijiyega, der ho gayee” (Sorry, got late). His warmth, humility and simplicity came through in his behaviour. He had no pretensions at all. I didn’t know a thing about Badr then, but could guess that he was some sort of a celebrity. It was only years later that I got familiar with his enthralling craft and came across some of his iconic poems which were in the M.A.(Urdu) syllabus in Aligarh Muslim University, even as he was a student there.

That day, Badr rendered some of his ghazals and nazms. He stayed with us for around an hour and talked about a lot of things, none that I can recall specifically today. But one thing that left indelibly imprinted in my memory was his deep agony over the Meerut riots and how his house was reduced to ashes. He almost broke down voicing the devastating pain of losing his home. I felt woefully bad then, I feel worse now as I know what it takes to build one. Before leaving, Badr patted my back and exclaimed: “Iski wajah se hum mil paye” (We could meet because of this boy). And he left wishing me the best for the future.

Faint vestiges of that chance meeting stirred my nostalgic mind a few months back, when I read in a report that the now 84-year-old Badr, the legend who charmed mehfils in his heydays, is fast forgetting his mushaira years and can’t even recount his poems as he reels under dementia.

How terribly sad, how inexplicably miserable I feel! Three decades back, the man had wished me a bright future; today, I want to wish him the best in everything for all the goodness he has spread, for all the happiness he has brought to the world through his creations.

Tirtho loves to dabble in poetry as a breather from his mundane job and pens verses whenever he can.