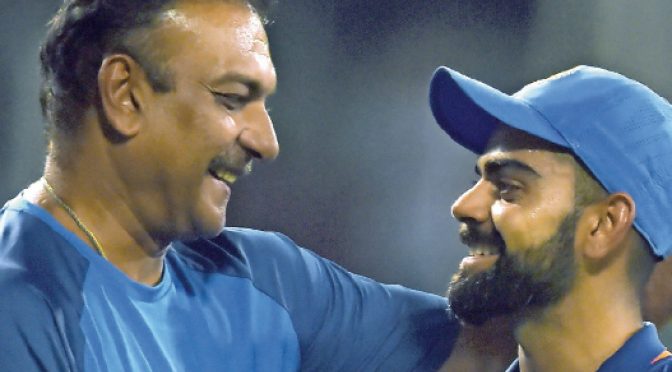 Indian cricket and Bollywood, and perhaps even politics, have a lot in common. There is a plot, oodles of drama, suspense and a happy ending, of course. In short, they follow a similar trajectory. They are strange bed fellows, minus the song and dance.

Over the next fortnight or so, a heady potion of all the three, will play out as India ‘hunts’ for a new cricket coach.

In  fact, the opening credits have already started rolling and the story has been set in motion. The twists and turns are what remains. Indian cricket has always had a bit of drama to it and we should brace for one more interesting tale.

The cast involves incumbent Ravi Shastri, who has been at the helm over two spells — one as director of Indian cricket in 2014 until the 2015 World Cup and then as the coach since 2017 after the Anil Kumble fall out, until now.

Shastri’s term was to end after this year’s World Cup, but faced with a short turnaround before the West Indies tour, he was handed a 45-day extension. Meanwhile, the Board of Control for Cricket in India (BCCI) advertised for a new coach with Shastri automatically gaining an entry into the list. The  deadline came to an end last Tuesday and it threw up an array of interesting names like former New Zealand coach Mike Hesson, ex-Sri Lanka coach Tom Moody, former Sri Lankan captain Mahela Jayawardene and homegrown coaches Robin Singh and Lalchand Rajput.

The Committee of Administrators, appointed by the Supreme Court, formed a three-member Cricket Advisory Committee (CAC) consisting of former India captain Kapil Dev, ex-India coach Anshuman Gaekwad and former India women’s captain Shanta Rangaswamy, to pick the next coach. It  should have been as simple as that. Only that, it is not. Prior  to the Indian squad’s departure to the Caribbean, skipper Virat Kohli weighed in by saying that he would be delighted if Shastri continued as they share a “great camaraderie”. Kohli said that the he would be willing to give his opinion if the CAC intended on having a word with him.

There are two ways to look at this though. Firstly, Kohli does have a point as the team has been under Shastri’s watch for quite a while now and they have a nice rapport. And being together for long they have formed a strong bond. Since they virtually spend every other day together, it is almost like a family, the argument being “why fix it when it ain’t broke?”

But then, Kohli shouldn’t have voiced his opinion as it amounts to lobbying and perhaps influencing the CAC. If one were to look back, the arm-twisting did work as the previous committee consisting of Sourav Ganguly, Sachin Tendulkar and VVS Laxman bowed down to his wishes and appointed Shastri following the breakdown with Kumble.

Ganguly has backed Kohli now by saying the captain has every right to voice his opinion. The irony of it all though is that Ganguly plumped for Greg Chappell in 2005 and we all know how that went down.

The other way to look at it is India cricket perhaps needs a new mentor and a fresh approach. India have been worth their salt, a superpower, no doubt, and Shastri and Kohli have had an impressive body of work. But two consecutive defeats in the semifinals in 2015 and the edition gone by, and not to mention the controversies littered during the period — Karun Nair, Ambati Rayudu and the circus that was the No.4 spot — it is maybe time to introspect and turn the page.

It is a crucial time as the World Test Championship will hit the ground running, with the T20 World Cup and the next World Cup to follow in 2020 and 2023, respectively.

If  the CAC do give in to Kohli, it will make a mockery of the system, not to mention, themselves. The process will then be rendered an exercise in futility and will set a bad precedent as candidates may never apply in the future. There’s another flip side to it. If the CAC does appoint a new coach and if he suffers the same fate as Kumble, then it will be back to square one, once again. It  is a quagmire the CAC find themselves in and hopefully they can conjure an happy ending.

Meanwhile, pop  some popcorn, sit back and enjoy the show!