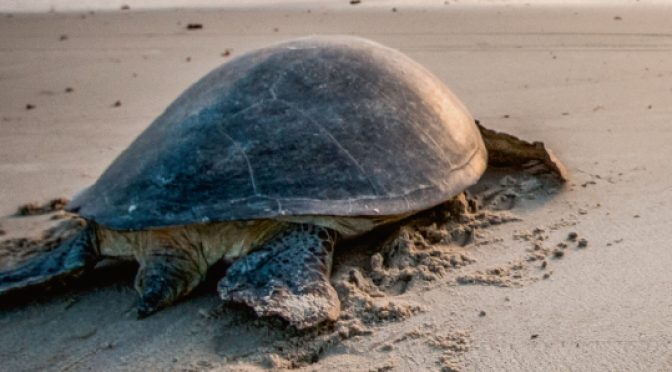 Giant turtles have been on my must-see list ever since I first saw their pictures two years ago. But a trip to Galápagos island in the Seychelles, where these gentle beasts are endemic, was not forthcoming anytime soon. So, when a recent trip to Muscat threw the opportunity to potentially spot green sea turtles on the beaches of Sur in Oman — June being the month when they come to shore to lay eggs — I was all-in.

A sizeable number of our group — 14-strong, all of us — set out on the three-hour ride from the city centre. We got to Ras Al Hadd a little after 9pm. Sur boasts an official turtle resort at Ras Al Jinz, so you can put up at their accommodation while availing their guided evening and morning tours. We weren’t looking to stay overnight, so the free public beach at Ras Al Hadd it was. The only snag? It was literally going to be a stab in the dark.

Without a guide, and having never been there before, our little expedition had all the marks of being a hit-or-miss adventure. Thanks to signboards and Google Maps (that saviour of all wandering adventurers), we were able to arrive at an area well off the main road and was, we sensed, quite close to our destination — yet wasn’t quite there yet.

We stepped out of our convoy to appraise the situation, and were immediately assailed by winds that whipped our hair wildly into our faces and threw our voices off course as we called one another. So much for peak summer — but we weren’t complaining.

One of us bravely decided to head out on foot across the sands to a makeshift structure in the distance that we hoped might house locals who’d point us in the right direction. When he didn’t return after a 15-minute wait, we decided to take the cars back around to look for an alternate route to the beach. Stopping at a couple of single-storey buildings produced a local who offered to take us to the beach but was haggling aggressively for far too much. We declined and he left, most disgruntled; I guess not making the easy Dh700 he was hoping to didn’t sit too well with him.

By now it was 1:30am, and our party was seriously considering turning around for the journey back to the city. We decided to attempt locating the beach one last time. But just as disappointment was setting in, after going around in circles for the third time, we reconnected with our comrade who’d set out on foot. He’d located the beach and — eeep! — a turtle!

With our adrenaline back on a high, we found ourselves on the beach in no time with his help, and there it was: A large green sea turtle digging steadily away at a sizeable sandy hole with its flippers. We’d read enough to know the golden rules: No white lights allowed, no disturbing them. A friend who accidentally shone his mobile flashlight on the creature got a fair bit of sand flung on him to much muffled laughter.

I’m going to come out and say it: The experience was surreal, but also… healing. Communing with nature, so far away from the city as we were, was knitting together a balance of restoration inside my head that I knew no spa session could compete with. The waves were lapping gently at the shoreline, leaving the beach shimmering in bioluminescent plankton. We marvelled at such a creation, and yet it had nothing on the staggering night sky. I looked up and my jaw dropped, for the Milky Way streaked right above us, with millions of stars around, like I’d never seen before — and I’ve only ever read about the Milky Way! We stood there for a long time, drinking in the celestial wonder to the sound of soft waves and a turtle turning over sand somewhere behind us.

A distant shout alerted us that more turtles were to be found. We watched from a distance as one dragged itself back to the water, leaving turtle tracks behind. The eggs, hidden in the sand by their mothers, take about two months to hatch — and the sight of baby turtles making the short treacherous journey from shore to sea this month is one to behold. With another trip to Muscat on the cards, I know I have turtles — adorable teeny ones — on my mind.

Karen loves her animals — though she has none of her own. She’s trying to figure out how to see pandas next