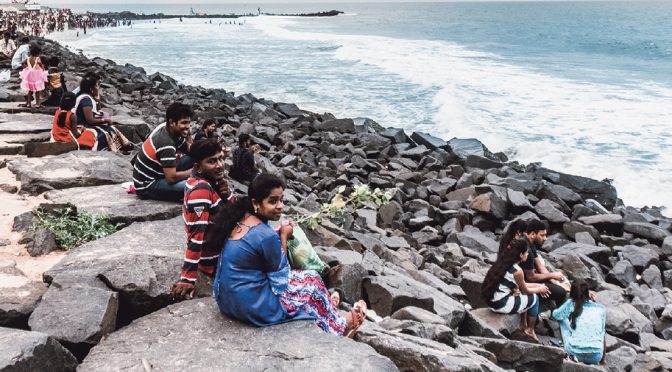 Pacing through the buzzing bazaar — the hub of Pondicherry (Puducherry) — my mind was running riot with apprehensions. My eyes were desperately seeking to sight him in the milling crowd. It was over an hour now and my imagination had started feeding on the negatives. I thought, perhaps, he had gone a little too far into the sea and failed to make it back to the shore. Or maybe, he was hit by a speeding vehicle and could be languishing in a hospital.

It was our first day in Pondicherry, India where we had gone down for a  holiday. Baba (father) wished to experience the sea and soak in the serenity of the waves. But disaster always strikes when you least expect it. He had lost his way back to the hotel after stepping out to have a cup of tea from a nearby stall. Baba couldn’t remember the name of the hotel and I had forgotten to put a card in his pocket with the address of the place. He was not carrying a mobile phone nor could he recall any of our mobile numbers. This was a perfect recipe for disaster. And it caught us unawares.

As I was trying to find him, wedded to my darkest fears, I kept praying for Baba’s well-being and hoping for a miracle. Suddenly my phone rang. Were my  prayers answered? It was the hotel reception desk informing me that Baba was sitting in the lobby and that I should come back to the hotel immediately – I raced back to the place.

As I entered the hotel, I was relieved to see Baba standing with a man — who looked extremely concerned. My wife and mother were there too. The stranger was a Pondicherry policeman – Ghanojikaran from the Grand Bazaar police station. He had rescued Baba. Ghanojikaran asked me to relax and take care of Baba, shaking hands with him before leaving.

After the dust settled, Baba shared with me how he got lost. The identical look of streets and his unfamiliarity with the city was responsible for his disappearance. First, he tried to find the place on his own. But when he couldn’t, he hired an autorickshaw and went around hoping to remember some familiar landmark.However, that attempt too failed. Luckily, by a quirk of fate, he enountered a Good Samaritan. He met Siddharth Gupta near the Aurobindo Ashram who took upon himself the responsibility to help Baba find the hotel. Though he had reached out to me on Facebook via a message, I, unfortunately, was offline.

Gupta then went around with Baba on his motorcycle, hoping to find the place, but in vain. Meanwhile he saw Baba panicking as it was getting dark, but the Good Samaritan reassured him that if they didn’t find the hotel, he would take him to his home where he could stay for the night.

While trying his best to allay Baba’s mounting anxiety, Gupta decided to contact the police. It was at the Grand Bazaar police station that Ghanojikaran took charge of the case. He gathered whatever details he could  from Baba and started his search. It took the marvellous cop just about half an hour to zero in on the hotel’s location and reunite Baba with us.

Hats off to Ghanojikaran and the Puducherry Police. We need more people like Gupta and Ghanojikaran in this world. They are humanity’s real face (real poster boys, if we could call them). It is because of people like them that we still have hope to survive all odds and overcome the gravest of adversities.