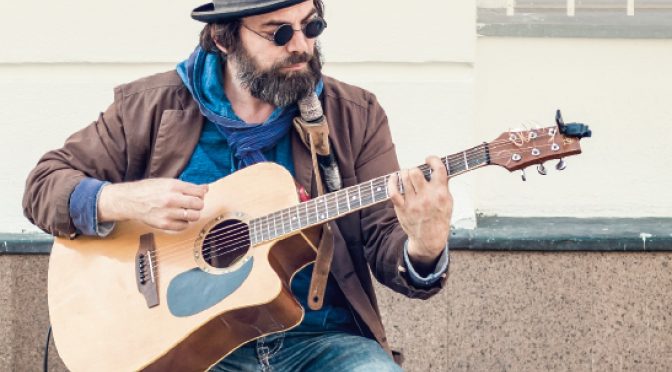 My friend knows a musician who can lend us a guitar for tomorrow,” my roommate Ksyusha said as our conversation about music turned into a plan for the following day. That same night, drenched in St Petersburg’s summer rain — we pulled out a guitar from an equally-soaked bag and my face lit up as I strummed into a song. The instrument wasn’t much — nylon strings and a small body won’t be heard out in the street but I just chalked that off as a lesson to bring my own guitar next time ’round. I played a total of three songs before we both dozed off for what we had planned for the next morning: Wake up early and perform along Nevsky Prospekt, St Petersburg’s main (read: touristy) avenue.

I have never busked in my entire life. The idea of singing in the streets first occurred to me during a trip to Ukraine two years ago. Since then, I’ve stated that I will perform in the streets somewhere. I’ve said that line both when I was in India and even back home in the Philippines. But owing to scheduling and lack of instruments, it never went through.

Our plan was the kind where it depends more winging it rather than being a by-the-numbers plot. As we stood along Nevsky, my eyes darted from one direction into another as I looked for a suitable spot to perform. Ksyusha was not native to the city so we both had no idea where to go. My gut then told me to sit on one of the benches situated along Gostiny Dvor, one of the canals that pass through the city. It was there where we busted out the guitar, kept the bag ajar and sat there while I went through a set of songs that I was making up as I go — see what I told winging it?

The song I chose to start things off was Oasis’ Wonderwall. Ksyusha was seated nearby, recording the performance and being part of the audience. As I got through the first few bars of the Britpop standard, people passed me by, offering me the minute glance and then carrying on with their lives. Some stopped by to record a short clip and a British tourist gave me a thumb-up as I went from Wonderwall to Hey Jude.

In between songs, I painted a nervous smile as busking was not as easy I envisioned. Having a proper sound setup does work wonders if you have it and having a set of songs in mind will go a long way. An old man approached Ksyusha and spoke to her in Russian. Apparently, the chap was telling me to step forward so that people can be encouraged to give us some pennies — or kopeykas, in this case.

His tip worked wonders — I decided to perform a rendition of Franki Valli’s Can’t Take My Eyes Off You and a young man passed me by. He did so twice before recording a video and dropping a 100-ruble (about Dh5) note in the guitar bag. In between lyrics, I gestured a ‘spasiba’ to him, which to this day I hope he heard. He was the first person to ever reward my maiden effort in busking; sure, Dh5 ain’t much but Ksyusha made me look at the bright side as we used the amount to buy two coffees to beat the July breeze.

We just hung back and conversed afterwards, having performed two hours on a trot. In retrospect, I’ll definitely bring my own guitar and busk more. On Nevsky Prospekt, I realised that it’s not the money that enticed me about street performance but rather the feeling of being on the ground and seeing hundreds pass by and appreciate music despite some of them not understanding a word. With every person who smiled and glanced, it reminded of the adage that music is indeed a universal language.

Keith is a journalist by day and a musician by night