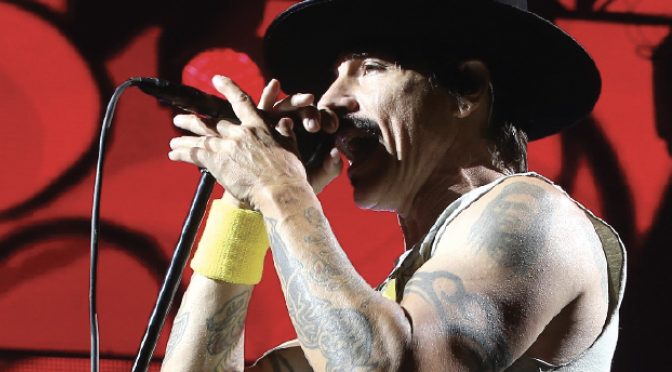 Veteran Rock band Red Hot Chili Peppers (RHCP) rolled back the years as they performed their first act at the Arena, the newest indoor venue in the UAE capital.

Held as part of Abu Dhabi Showdown Week, the concert saw mostly middle-aged folks swaying their heads to RHCP’s funky numbers. After waiting for hours in anticipation, the capacity crowd went wild as vocalist Anthony Kiedis, bassist Flea, drummer Chad Smith and guitarist Josh Klinghoffer started with Can’t Stop from the band’s 2002 album By the Way. It was an explosive debut in Abu Dhabi for RHCP who had been on the road for a while now in Australia, Egypt and the United States.

As the night grew older, RHCP moved onto record hit numbers like Californication and Otherside, The Zephyr Song again from By the Way, singles like Suck My Kiss, Soul to Squeeze and Dark Necessities from the 2016  album The Getaway.

It was an energetic ride from the veterans, who are known to take things to new levels with each performance. The crowds in their thousands were treated to a passionate flow of alternative rock numbers. Kiedis was in his element and Klinghoffer was sensational as the band performed Dani California.

RHCP closed the night with Give it Away as fans partied like there’s no tomorrow.

The RHCP concert was held as part of the Showdown Week — a seven-day festival of events held as a run-up to the main card UFC 242 bout to be held at the same venue tomorrow.

Ashwani is a huge fan of the Rocky series and when down, he draws inspiration from Bill Conti’s Fly Now