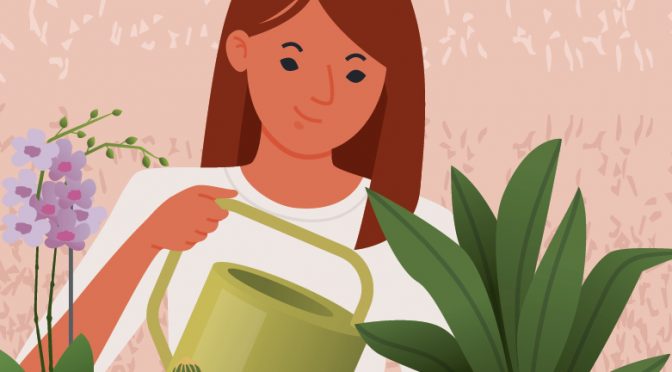 A few months ago, I had an epiphany that, incidentally, came through an app my better half had downloaded for me so that I could monitor the time I spent on my phone. By the end of the first day, I had spent close to about 10 hours on it — nearly as much  time as I spend with my partner on a regular workday. The alarm bells in my head rang.

“What am I doing with my life?” is a question that comes to haunt you just when you are busy ticking the boxes of a conventional life. It came to me the moment I began reconsidering my relationship with my smartphone. Perhaps the quarter-life crisis would have deepened had a younger colleague not mapped a trend for the weekend magazine of this newspaper that had become a talking point. Indoor plants, she contended, had become a rage, following the emergence of plant bloggers on Instagram. #InstaPlants was now a thing.

Plants and I had been estranged for a while. The first time I thought of growing a green thumb, I brought home a lavender plant that (quite literally) didn’t see light of the day. Two years later, I got a succulent thinking it would take a monumental effort for it to dry out. Dutifully offering it two mugs of water every week didn’t help matters. Having put an RIP on two plants, I realised my green thumb was not so green, after all. But something about my colleague’s story gave me hope.

In July, work took my partner to India. Ordinarily, I think of his absence as a time to indulge in excesses. This time, the indulgence would be plants. Peace lilies, a snake plant, pothos and a money plant found their way to my home. In the absence of a balcony space, I kept them in my drawing room, resolving to not let them die this time around.

From scrolling through the social media apps on my phone, I found myself reading on houseplants and began exchanging notes with colleagues who have gardens of their own. Sunlight, fertiliser and water, as I was to discover, weren’t enough — you had to go beyond the obvious. This meant talking to them — though scientifically it remains a contentious claim. A quick Internet search will tell you that most avid gardeners actually talk to plants and play music because it is believed that the vibrations help them grow quickly.

And if you happen to be a feminist, you would want to believe in the widely-held notion that plants grow faster listening to a female voice (again, there is no scientific proof).

No matter how joyful and quirky these findings are, the dilemma always is what do you talk about when you talk to plants? What are the stories of hope that humans can possibly offer to them? That somewhere we are culpable in destroying them and the environments they can be nurtured in. That Amazon rainforest — called the lungs of our planet — continues to burn, posing a serious threat to its ecosystem? That trees continued to be lopped off at an alarming rate in Indonesia and Malaysia to make way for commercial spaces?

The havoc we have wreaked on the planet will take years to rectify — if at all. Till then, ideas as basic as keeping houseplants will need Internet’s glossification to appeal to those who live on it. Two months since I re-grew my green thumb, each day is a lesson in parenting — from caring to pruning to feeding. And while I am yet to find that story, a monologue with plants may just have given me a new purpose — to nurture nature.