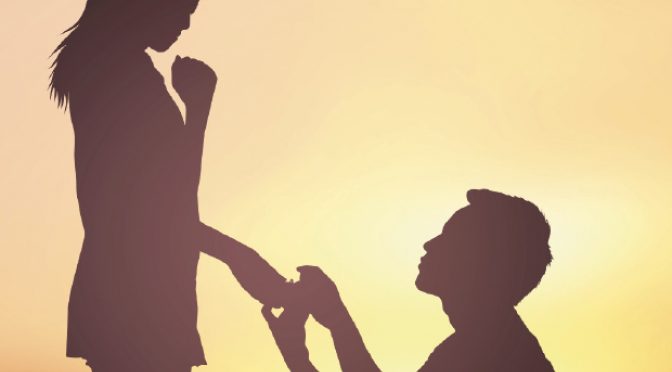 Before you congratulate me, Filipinos wear engagement rings on the left hand,” I told my Dubai colleagues as I showed them the ring me and Kim got ourselves back in the Philippines.

I had to conjure up an explanation of what a promise ring was: “Oh, it’s like the engagement ring before the engagement ring,” was my go-to answer. It was an answer that I picked up after researching about the ring on the all-knowing internet. I relied on the quip so much that I was told by an editor to write about promise rings and the idea of being engaged before you’re actually engaged.

According to wedding website The Knot, a promise ring is given from one person to another in a romantic relationship to signify their fidelity and commitment, often preceding an engagement. At its most essential, giving a promise ring symbolises one partner’s devotion to the relationship.

I only knew about promise rings earlier this year. Kim and I were having a conversation on jewellery and she asked if I knew about it. My response led to an evening googling what it was, which helped me decide whether I would want it or not. I loved the idea of having something to hold onto before what I would call the ‘major milestone’ rings and couple that with the fact that we were going to be over 7,000 miles away from each other, I believe having matching rings was a nice reminder of the person I choose to be with.

There are no hard and fast rules when it comes to promise rings; according to online jeweller The Diamond Pro, the rings can be exchanged between both individuals or just one person. They tend to be smaller and less extravagant than their engagement ring buddies and it can be worn on any finger.

Promise rings could also carry greater meaning than solely being a pre-engagement ring. “The appeal of the promise ring is derived largely from the many meanings it can represent,” Kimberly Kanary, vice-president of public relations and social media at Kay Jewelers told The Knot.

We had got the ring while on a road trip last month. We saw a jeweller while strolling around the mall and decided it was a worthwhile venture. I chose to keep the rings first and gave it to her once we got back to Manila. It was the 23rd of August.

I took Kim near the riverbank. It was a place that I frequented as a kid and the area carried great meaning for me as a youngster whose sole dream was to have his writing be recognised. It was an evening absent of breeze, the traffic from the road behind us felt like an echo as we exchanged promises and proceeded to put the rings on each other. Tears obviously ensued.

The rings never left our fingers. A couple of days later my mother saw the ring as my family picked me up from Dubai airport. She remarked: “So, is she the one?” I smiled. I processed my mom’s question inside my head. As we drove home along Al Khail Road, I had an answer to her question. As Dubai’s lights shone on my ring I was brought back to that evening by the riverbank — promises are meant to be kept.

Keith loves items with a lot of sentimental value