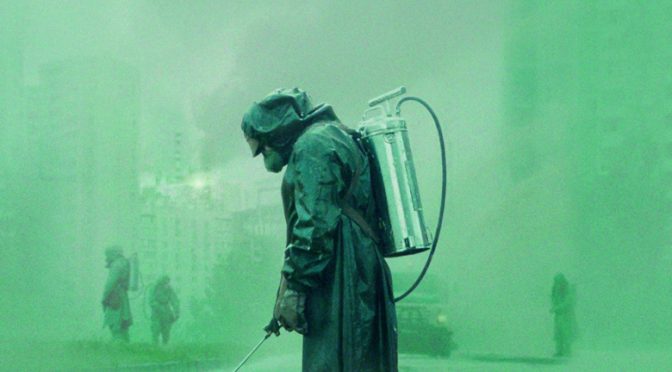 I am not huge fan of television. However, the news of HBO’s mini-series Chernobyl, based on the 1986 disaster, becoming one of the big winners at this year’s Emmys made me reach out for the remote and switch on the show. After all, I have a strong connection with the place — I’ve been there and seen it all during one of my sojourns.

The five-part series gives an account of  what happened at reactor No.4 on April 26. It also shows the aftermath, cleanup and bureaucracy that the disaster left behind.

I recollect my visit to the Plant two years ago. The New Safe Confinement (a shelter built to confine the remains of reactor No.  4) gleamed under the sun which pierced through Ukraine’s autumn skies.

The facility looked spanking-new; there were no signs of an explosion. However, as I stood in front of the plant, I was overcome with fear. It is this sense of impending doom that HBO perfectly captures in the show. There is one particular scene when the Plant explodes and leaves behind a trail of ‘snow’ that extends to the nearby town of Pripyat. The residents mistake it for ‘real snow’ resulting in fatal exposure to radiation. In another scene, one of the firemen responding to the initial emergency at the plant grabs graphite from the reactor core — oblivious to what it is. He then asks his colleagues nonchalantly about the rock before panicking and groaning as the skin on his palms starts to melt. His fellow firemen, none the wiser, takes him to a hospital and proceeds with what was to be their last mission.

HBO’s portrayal of Chernobyl’s invisible touch of death is what I believe to be one of the major reasons why the show won big at the Emmys. Watching it took me back to the day I was on ground zero, attempting to retrace the panic and horror of that day.

The show reminded me how one has to be extremely careful and not touch anything inside the zone. It reminded me of the hours I spent visiting apartments, imagning what it would have been like before disaster struck — how residents were caught unawares.

Kudos to writer Craig Mazin and director Johan Renck for the win, for narrating this extremely disturbing story in the way that they did. According to a report on Deadline, Mazin confirmed that he has no plans to create another season of Chernobyl. I guess some stories are better told only once.

Based in Dubai, Keith has hung up his travelling boots to find home.