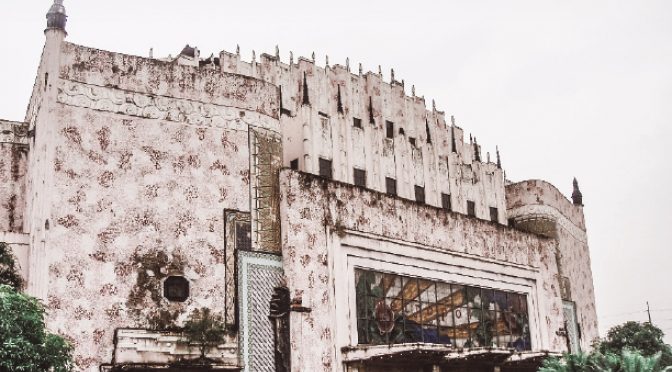 As the minibus to Manila City Hall started descending down Quezon Bridge, I could not help but notice the building adjacent it. From my seat on the left, it looked like a decrepit structure, its façade covered in perhaps moss or soot. But years later, as I walked past this magnificent building on my way to the metro station, I found out that it was the Manila Metropolitan Theatre — an Art Deco building that was inaugurated in 1931.

Turning back the pages of history, I discovered that the Manila Metropolitan Theatre, or MET, was the brainchild of the Philippine Legislature during the American Colonial period. The idea of constructing a theatre came about in 1924 when Senator Juan B. Alegre proposed the construction of the building within Manila’s Mehan Garden. This location was specifically chosen because in 1862, during the Spanish rule, there stood a theatre at the location until it was burnt down in 1876.

The building was designed by acclaimed architect Juan Arellano, the man who also happened to design  the Manila Central Post Office right across the road.

The MET staged various dramas and musicals until World War Two when it was partially destroyed during the Allied bombing campaign to liberate Manila. After the war, the MET fell into decline and was used as a location for prizefights, a motel, a basketball court and as a shelter for vagrants.

Efforts to restore the MET over the years became a mission for every politician who came to power. But none of the efforts came to fruition — until recently.

A series of photos shared by the Philippine Star show the ongoing efforts to bring this architectural wonder back to its glory days. Unlike the shabby, moss-covered building of my student days, it now has  a fresh coat of paint, the ceiling has been refurbished and various artworks from the Philippines’ roster of grandmasters are gradually being restored. According to the Philippine Daily Inquirer, the pre-war structure will reopen its doors next year.

Like its heyday, the MET will reopen with the same performances it once used to stage — the Zarzuela, a Spanish form of musical comedy. “This theatre once housed Zarzuela performances, which is why we will open [the MET] with Zarzuela,” National Artist Virgilio Almario, one of the minds involved in the restoration efforts, said.

Seeing pieces of the MET slowly come to life made me recollect its once-decaying state. Patches of dust covered every single exterior wall hiding the carpet-like pattern underneath. The stained-glass paintings in the entrance could barely pass any light through them. My younger self felt sorry for the degeneration of this wonderful facade, but now, I’m glad to know that the Manila Metropolitan Theatre is finally receiving the love it truly deserves.

Keith believes in the human capability to restore beauty.