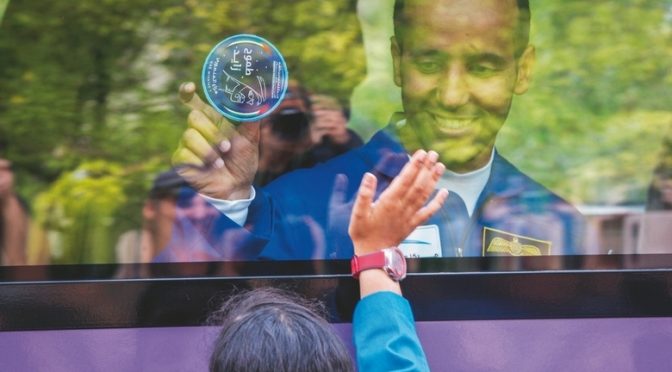 I was woken up at midnight to noises of children playing out in the hallway of where my hotel room was located. “Why are there kids here in Baikonur? And at this late in the hour?” I thought to myself.

Baikonur is the launch city of astronauts and I was there to cover the historic mission of UAE astronaut Hazzaa AlMansoori. He was blasting off into space on September 25. I had reached the city (more a desert, actually) a week before liftoff day as I had access to Hazzaa and the crew even though they were in quarantine.

The team behind the launch — staff at the Mohammed bin Rashid Space Centre (MBRSC) — were arriving a few days after I did and we were staying in the same hotel. In the meanwhile, I was one of only four guests in the massive building that’s been around since the early 1960s. So, hearing the playful screams of children in the middle of the night seemed something straight out of a horror film.

I listened in closer to the voices and realised they were speaking Arabic. “Emirati kids? The MBRSC team must have arrived. But, why’d they bring their kids?” I thought.

I threw the blanket off of me, switched the lights on and rushed to the door. I took a peek and see two little boys and a young girl running across the hall and into a room, about six feet away. I recognised those cute faces — they are Hazzaa’s children.

I couldn’t believe it. Hazzaa’s family was staying right next to me. Journalists had been trying to get access to them and there I was, their temporary neighbour. There were hundreds of rooms in the hotel and I was right next to them. At that exact moment, it all became very real. Their father was blasting off into space for eight days and these kids were super-excited and happy to be here.

The next morning in the lobby I saw many new faces, but most had a very strong resemblance to Hazzaa and Sultan Al Neyadi, the backup astronaut of the mission.

An MBRSC staff member kindly familiarised me with the new people around me. “That’s Hazzaa’s brother,” she pointed at a man who appeared in his early-40s. “That’s Sultan’s father and those are his brothers,” she said next, gesturing towards an elderly man, probably in his mid-70s.

The UAE was having its Yuri Gagarin moment with this mission and I was smack in the middle of all the action. The entire MBRSC team behind this mission and the astronauts’ families were all under the same roof with me.

It was obvious how proud Hazzaa’s brothers were of him. They spent a lot of their time in the lobby, making phone calls and interacting with the MBRSC team, ensuring their dear brother was safe and ready.

Meanwhile, Hazzaa’s children spent most of their time in the hotel with their mum. Though majority of their time outside was spent with their uncle, who took care of them on launch day as well. The love and strong bond in the family was visible and it’d be obvious to anyone how proud, but also nervous, they were.

The day the Soyuz rocket was rolled out, Hazzaa and Sultan’s families watched it together. I photographed them, smiling and looking at the giant rocket that would take Hazzaa to space.

Two days before the launch, I and five other journalists who were staying in the same hotel were invited to have dinner with the MBRSC team and the astronaut families. Even though I had been here many months ago for another mission, it was the first time I had seen a full traditional Emirati cuisine being offered. The tables were filled with laughter and long conversations.

Hazzaa’s children spent the launch day wearing their blue astronaut jumpsuits. Their uncle lifted them up to the window of the bus their father was in, leaving for the sokol suit donning. The emotional moment quickly spread on social media.

I was one of the few journalists who had access to the sokol suit donning, which were also the last moments the astronauts had together with their families before liftoff. They waved goodbye from behind a glass wall because of quarantine.

A few minutes after the historic liftoff, the viewing room the families and MBRSC team were in was filled with happy tears and pride.

When I got back to the hotel, Hazzaa’s brothers stayed glued to their phones, watching the live stream to see when the Soyuz spacecraft would dock to the International Space Station. And when it did, many hugs were exchanged and happy tears were shed again.

Being right in the middle of all the action, it pains me that no interviews with them were allowed. I tried, but just getting the opportunity to observe all of it so closely was incredible and euphoric.