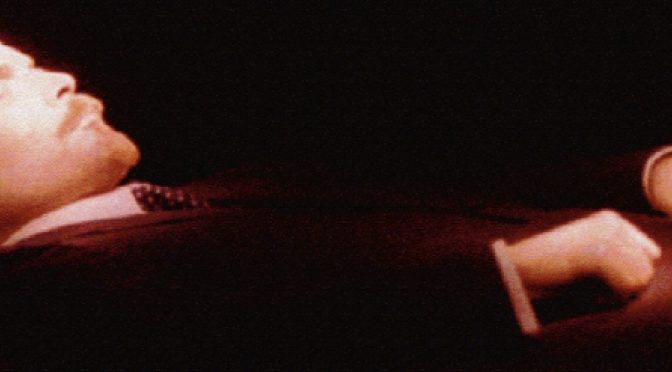 It’s close to midnight and raining in Moscow, which added more bite to the 1°C temperature consistent with the October climate. The golden glow from the illuminated GUM shopping mall in the merchant quarter known as Kitay-gorod mated with the rufescent brilliance radiating from the facades of the Kremlin, St Basil’s Cathedral and the State Historical Museum. I stood at the centre of the Red Square, lips and cheeks wind-burned, as a tsunami of emotions devoured me.

While a microcosm of the capitalist world milled around me bantering about what I believed is the noblest way of living and thinking, my heart throbbed with both pride and pain. For the mere reason that I was a born communist, and grew up reading Soviet literature that had invaded my childhood, it’s natural for me to raise my clenched fist in a burst of nostalgia and shout, Long Live the Revolution!, in soulful ecstasy.

My head spun with dizziness. As I held onto a cop next to me, he said, “Come tomorrow. You can see him. The mausoleum opens at 10.” I ran back to my hotel at a stone’s throw and emptied the rest of the Kremlin Award I had purchased from the grocery store AB Daily. A night passed fighting the dilemma, ‘To see or not to see Lenin, the man who drowned a noble doctrine in human blood’. Dressed in black to the occasion, I was back at the Red Square at 8am, spearheading a long winding queue and fighting the lassitude from a sleepless night.

After navigating through a regimented screening process, I darted like a demented dog when the gates opened, leaving the rest of the visitors way behind. Walking down a flight of stairs into the dimly-lit step-pyramid was a macabre experience, with mummy-like guards posted in every corner (I’m still not sure if they were real or wax sculptures). The air was thick with the Red Terror that the father of the Soviet Union had unleashed on its own people. A genocide of barbaric scale.

And there he was, lying in a glass sarcophagus, clad in a black suit. His eyes were closed, beard and moustache trimmed and hands rested calmly on his thighs. It’s overwhelming to stand alone in the dark chamber and watch communism in the flesh. Frozen in time.

As I took a U-turn at the foot of the casket, eyes still locked to the luminous corpse, his fingers twitched and eyes blinked. As if he gestured to me to halt.

“Comrade? There’s blood on your hands and teeth. You look like a sleeping vampire. How can you be so calm after you and your followers killed more than 100 million people in the last century? “

“Stop your sarcasm. I am not guilty.”

“You wiped out the Tsar family. Was it necessary? To kill someone in captivity is cowardice. The death toll directly attributable to you is in excess of three million.”

“Extermination of enemies of the revolution was a key pillar of communism. To kill is ingrained in our principles.”

“Don’t forget that World War One killed up to 15 million people. Without the Soviet Union, fascism, ethnic conflicts and European civil wars would have killed a few millions more in the following years. The Bolsheviks initially abolished the Death Penalty. It was mass killings by right-wingers that changed the scenario.”

“An eye-for-an-eye punishment has no place in modern society. It’s barbaric.”

“The transition from capitalism to socialism was not possible without a dictatorship. So we declared dictatorship of the proletariat.”

“That’s because you usurped power without popular support.”

“It’s a historical obligation. Comrade, let me ask you something.”

“You were a foot soldier of communism. Am I right?”

“Once upon a time, something I am ashamed of, Lenin. A page in my life that I hate to remember.”

“You carried bombs in your school bag. There was a sword strapped to your back, always. Violence ran in your blood.”

“I have changed, comrade. I don’t fancy your brand of communism any more. I believe in humanism.”

“You were selfish, a coward. Do you remember comrade Fatima and the day you were on the run and hid in her place? You were so hungry she gave you some soup to drink. You couldn’t gulp it down in that nerve-wracking moment. Fear had blocked your throat. She told you to take at least a mouthful because she said it could be your last supper. You then ran away from your cause because you were a coward.”

“Lenin, to kill is not heroism. You executed the Kulaks because you were afraid. Genocide is not the way to change society. Love and peace are the greatest of all ideologies in the world.”

“I thought the ends would justify the means.”

“Lying in this dark chamber of oblivion, did you watch what unfolded when the Soviet Union collapsed? There’s so much rot beneath its pillars. People were fighting for a loaf of bread. Ken Galbraith was right: Under capitalism, man exploits man. Under communism, it’s just the opposite. ”

“So what do you want me to do? History cannot be unlived.”

“Oh God! I’ll update Xi Jinping and Vladmir Putin the next time they walk in.”