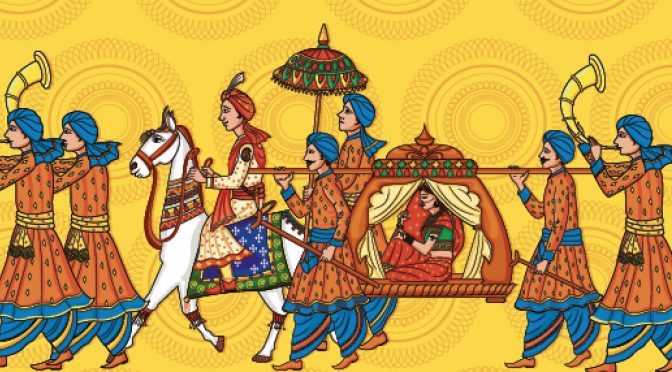 November 23, for some reason, is being seen as the peak day for marriages and in India, they are running out of flowers. And horses for grooms to ride on. It is like an epidemic of adoration and Cupid on overtime.

All these guys laughingly being told their last days of freedom as they simper to the site of the marital rites, full of dewy-eyed love and all these women dressed in 100kg of wedding clothes staring equally lovingly at their swains. Happy for them but it does not answer this conundrum.

Have you noticed how people who are not married are always being asked when they will settle down? When you are bachelors you are settled down. Your food is from the morning leftovers and by the time you get to it, the goo has settled down. The unmade bed covers have settled down. The single life is settled. You are master of all you survey even if the view from your windows stinks and you can do  what you want when you want.

And that is such a settling feeling…

This is why I have never understood why marriage is seen as settling down. On the contrary, after the wedding is over and the guests have gone and you are stuck with five unwanted photo frames, six faux crystal vases and four coffee carafes and wilted flowers — not to mention each other — life is an upheaval. And it stays upheaved, if there is such a word. I have been married 40 years and my wife still hopes I will become sartorially elegant (among other disappointments).

And it stays in upheaval mode because your wife has you making moves like you were a pawn on the chessboard, which even though you do not know it, you are. And it is her chessboard.

You have to adjust at so many levels. And it is overnight, a breathless demand to work your lifestyle. She is not going home, this is forever and a day, your bathroom has been invaded, her clothes  hang on the shower curtain rod like semaphore flags, it is only week one and she has already decided to discard your favourite clothes, discard your collection of music and discard your bachelor day ‘salt of the earth’ friends. She does not like the décor of the house and has fully declared war on your trusty domestic help. She’s already told you he is insolent, has attitude and will not listen. This is the guy who cared for your every need these past six years like you were best buddies and now he is about to pack his bags. He feels betrayed and he tells you he is out of here. But at least tell me where my things are first.

What things, your wife has thrown them out.

Come mid-December the poor guy who was known to his friends as a life of the party will be wondering what hit him as he waits for his newly-minted wife to be ready for the 8 o’clock dinner and it is already twenty past; what on Earth are you doing?

Husbands are also put through the test. What will I wear, I have nothing. Say what, your cupboard creaks with new clothes my little buttercup can you just get on with it.

You get calls in the office in the middle of meetings, which are totally different from pre-marriage days when they were from girlfriends and had to be answered; these are from wives telling you to buy brown bread and some butter, we can talk in the evening, dash it, all night if you like, just not now. You do not WhatsApp ‘sweet nothings’ to your wife nor do you go to the office to come on video chat.

And what is this about getting angry because I cut off, I am in office.

And as havoc and hurricanes make mincemeat out of your freedom, friends come along and blithely say things like, ha, good to see you’ve finally settled down.

Settled down? Are you nuts? This is total chaos. I was so settled down before I got married. I had routine. I would read when I wanted, play squash at 6, maybe 7, even 8 in the evening without being answerable.

Where are you going?

You can’t, we have the Puris coming for dinner, go buy some decent ice cream, not that cheap brand, the good one; it’s so embarrassing when you stint.

And this is just for starters.

So much for having gotten married and settling down.