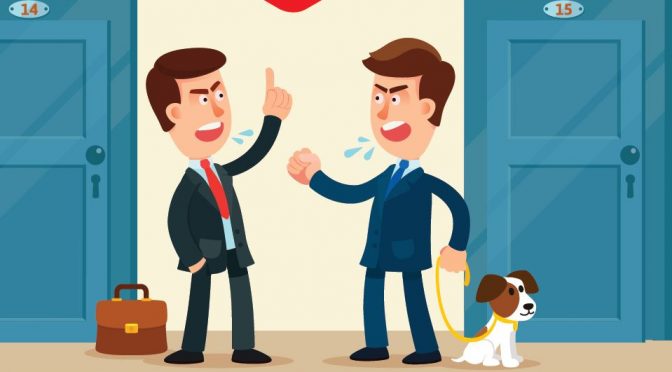 My friend is fighting with his neighbours. Fighting with neighbours is big business, especially if you live in blocks of flats with six inches of space between each other and start off your relationship on the boil. Expats have this tendency to come so close to each other until there is no sun peeking through. Literally in each other’s laps. Then the kids fight, the wives have a misunderstanding, the husbands come home after being slagged off by the boss in a sour mood and now they have to take sides and the frost settles in.

Love thy neighbour, they said. A neighbour is a golden gift. Helloooo, where do you  live… in the North Pole?

Seeing as how there is hardly any space to move about in the first place you’d think people would be smart and not crowd each other on day-to-day basis but they do. Kids spending the whole time together, the wives becoming inseparable, the husbands catching up at night, they share parties, gossip and things from the kitchen, all of these a recipe for disaster.

You share things from the kitchen you can bet dollars to cabooses that trouble will rear its little ugly head. Neighbours are made to annoy you. That’s their job. Not be best buddies.

Like dripping washing fluid from above or slop water trickling onto your balcony — and will you please stop that thumping sound before we come up and discuss this — flipping neighbours, no civic sense at all.

No common sense either. Throwing their rubbish out of the window onto our ledge. Having parties and not inviting us. Playing music loudly; you there, lower the volume of your TV set. Releasing their kids into the corridors on a holiday afternoon — screaming, ill-behaved little devils.

Some of them even have dogs and cats and there should be laws against that, barking at 4am. Wish I had a weapon.

And then there is this guy who is everyone’s neighbour, who never respects your car park space, your potted plants or your privacy. Even his guests park in your space and if you complain he asks you to take it easy.

How can anyone take it easy if he has you as a neighbour, mister?

So I tell my friend that if he can’t do the best thing — which is not to have neighbours at all — then do the next best thing which is to follow Vohra’s Be Ahead Of Your Neighbour Guide, going on sale now for Dh10 only.

If he has a dog, buy a bigger dog.

If he blocks your car space, block his and disappear for your annual vacation.

If he can’t be bothered about throwing his garbage on the dumpsite, leave all yours outside his door in the middle of the night.

If he flaunts his new car puncture it at night (uh-oh, that could get you into trouble).

Yeah, yeah, says my friend, this is all very well, but get practical, they are driving us crazy.

Change houses, I say, and make a new start with my five-point programme.

What’s that, he asks, perking up like coffee in a percolator.

Don’t ever share domestic help, I say; that’s a guarantee to war.Domestic help will play you like a harp. Then never borrow money, food or not take payment for movie tickets and don’t attend every party or function the other one gives.

Do not discuss your husbands and wives with each other, share marital secrets or compete about your children’s successes. It will rebound badly.

Don’t score over your respective earning power or the social symbols you have that will create friction.

Never give your home over to neighbour friends when you go on leave or leave your children with them for too long or forget to pay them back for the courtesy.

Finally, never have a third party who is a common friend; it is in the nature of things for that party to destroy your relationship.

How do I know why? I have had neighbours, too.