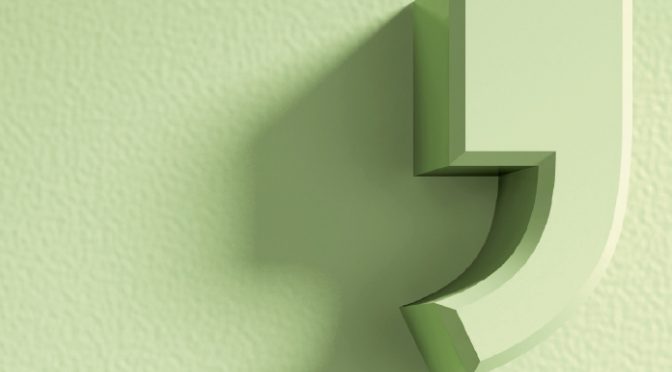 I never knew there was an apostrophe protecting society until it closed down two weeks ago. Well, I was never a fan of that hanging notation either. When everything else out there stays neat like a line of ants, and why does apostrophe jump up to distort the rhythm?

If you’re a fan of cursive writing like I am, you’ve got to lift the pen to put it up there and that is pure disruption. Writing out ‘shouldn’t’ and ‘should not’ have the same amount of effort, especially since the typing era. No big deal, buddy!

There’s another one that bothers me as well — it’s the hyphen. C’mon, those little dashes can choose to sit just anywhere and make us wonder what it’s doing. Think about a grande-skinny-caramel-macchiato with hazelnut-peppermint-foamed-caramel-drizzled-pumpkin-spice in a venti cup. I’m pretty convinced the hyphen jumped out of a Lego box. It thinks it can build itself as high and as long as it wants, huh? Not to mention it’s rubbery-elastic attitude which adds different meanings stretching its length.

The whole word-juggling thoughts made me remember long-lost friend, Clippy — Microsoft Office’s annoying/helping paper clip assistant. She was the first of her species — the grandmother (evolution begins with females) of Alexa and Siri. I wonder what Clippy has been doing since she’s been fired. Maybe she had a lesson to learn from the apostrophe, which has been hanging around since God-knows-when.

I guess I’ve got check out if William Shakespeare actually used apostrophes. He would’ve not used that many hyphens for sure — complicated coffee drinks were not sold during his time.

Language evolves and I guess some of the usages decay over time. Remember how we sent SMS from our brand-new Nokia 3300 — omitting all vowels! It’s evolved — FOMO, BOGO, idk, ttyl work better.

It’s tough for me when someone corrects my usages telling an adjective comes before a noun and a preposition comes before a verb (or is it the other way around?).

The happiest time for me using languages was when I had put the non-grammar-fan-part-of-me into action while working for magazines. Our team was 20-ish millennials and we quit using guidelines, started coining terms and had our devilish laughs when it made its way to print. There were no style-sheets — we broke every rule slow and steady.

Eventually, other editorial teams began mirroring our ways and we took a chuckling-pride in changing long-term patterns.

I am sorry John Richards; I’m not a great sub in your terms. And please don’t be disappointed; I bow to your dedication in trying to help a punctuation for 18 years — it’s exactly the same way I feel not having the biryani emoticon when it’s the most consumed food in the world. It’s unfair and I believe there’s a lot of power play in not allowing the dish to have its place in the emoji tray. I don’t get why people don’t talk and protest about it. It’s high time we raise a unanimous voice. Fighting for it can be my retirement plan if it doesn’t come by until then.