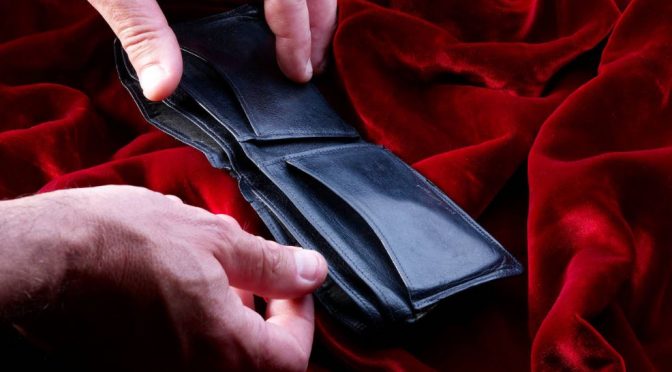 Then I was in my teens, I got my first wallet and my mother put some money in it as a sign of forever prosperity because we, in our part of the world, believe so. That prophecy didn’t quite come true largely because I never got used to putting money in my wallet. I will put it in different pockets, stick it in my blazer, shove it into a side pocket of my jeans — I just don’t like to put cash in my wallet. This is kind of crazy, I admit, since that is the aim of wallets. But I have this irrational belief that if I put money in the wallet and it gets stolen there goes the money. There must be some of us out there who feel likewise and though our numbers won’t be large, who is to say we are not making sense. Also, imagine the thief’s face when he opens it and finds zilch… this scenario affords me a very warm and fuzzy feeling. Ha, ha, ha! Fooled you!

But this has not deterred me from engaging in a saga of my own where this particular item is concerned. In this swanky hotel, everyone is dressed better than you and you get into the elevator and find a wallet on the floor. It looks nice and thick and I solemnly take it to the front desk of the hotel and hand it over, feeling all holier than thou and good about myself. That evening, we are at a large party and I find an abandoned iPhone — it was locked, so I cannot trace the owner. Anyway, by spreading the word, the owner and the phone are finally reunited while I am thinking, “what is going on? Twice in one day. I haven’t found anything in 70 years and now I do two good deeds in a day.”

It was easy to do because I was on home ground and I marched straight from the lift to the desk and handed it over, 20 seconds tops.

Now, shift to Charles de Gaulle airport in Paris and the Vohra family is waiting for the connection to Havana and — presto! — on the sleeper sofa is a wallet wedged in the side of the lounger. “There is a wallet wedged in here,” I say to my wife, “somebody must have dropped it. Have I told you I am a master of the obvious?”

“Pick it up and report it.”

“No way, it will have my fingerprints on it.”

“Hand it over to the authorities.”

So she picks it up and hands it to me and says, “go give it”.

It is fat and bulging and has that cascade of credit cards and a thick wad of money.

In a flash, this scenario of me being caught with the wallet in my hand and the French gendarme (policeman) saying, “hmmm, essayez encore. Qu’avons-nous là? où allez-vous avec ce portefeuille? (Now, what do we have here, where are you going with that wallet?)”

“Then why are you carrying jean Pierre’s wallet?” (Also spoken in French because the French will not speak in English.)

This whole thing unfolds in micro seconds. There you are, an Indian in Paris holding Jean Pierre’s silly wallet and who is going to believe you are the good guy doing the right thing. In a second flash I now cannot even fling it away because I might be on candid camera so honestly, I don’t know what you would have done but I raise my arms, google “Lost wallet, anyone lose a wallet” in French and begin to shout “un portefeuille perdu, un portefeuille perdu” while waving flipping Jean Pierre’s treasure trove wildly until two policemen armed with guns, truncheons and probably tasers march up to me and I try to explain why I am acting like a clown. Suffice to say we did catch the flight to Castro-land, but it is a very unnerving experience. What if Jean Pierre had said oops, money missing? What if someone had already cleaned up some of the stuff, used the cards and then wedged it into the one lounger I chose?

Then I am at a club in London and playing small-time roulette and there six white people and one brown flake (moi) and one man suddenly says, “migoodness I have lost my wallet, it has gone”. And everyone looks at me. It is the most eerie sensation in the world, years of politeness distilled into instant racism, has to be the brown guy. And what really gets you is that under the glares you look guilty.

I don’t have it, I blurt stupidly. Why is everyone looking at me? You won’t believe it but it is found in his trouser cuff — he had pushed down the back thinking it was his pocket.