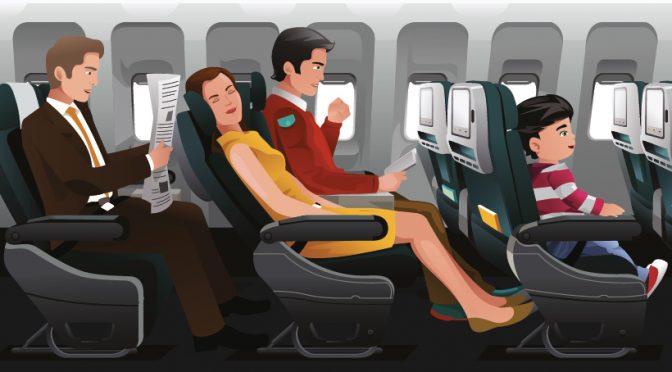 Never take a holidaymaker flight that is on a low cost airline.

It is a nightmare and I was riding on it last week from Delhi. Families discarding their warm clothes from the 1 degree frost of the Indian capital like butterflies shedding their pupa and emerging all colourful and frothy and emblazoned with summer motifs.

The new rich middle class, so entitled and pushy, lacking courtesies, their obnoxious little kids in tow, most of them fat and sleek like Casca, spoilt and demanding, running up and down the aisle, leaping on seats, pulling headrests, indulgent parents telling them not to with no heart in it, so why would they listen – smack the fellow.

They carry so much onboard luggage. Like sherpas on a hike to Everest. This load is stuffed willy nilly into inadequate spaces called overhead bins. Obviously, they will fall out when opened mid-flight, and they will be opened mid-flight because the owners will need something from within. And do they eat. All through the flight people are eating. Chips, sandwiches, noodles in tetrapack, slurping juices, digging into their binned carry-ons for more food, foraging like bears out of hibernation, chewy munchy sounds driving you crazy.

With groups of buddies following the sun to Dubai, ready for the blue skies and let’s start swinging now, six of them in a singing competition even before we reach a cruising altitude. Nothing more annoying then a gang of friends going on the trip together, all that loud and brash noisiness, stapled by the diktat, we are on v-a-c-a-tion, we have to enjoy, it is the mandate, shouting across the aisle, throwing packets in a pass it on, opening minis to lubricate the bonhomie, isn’t this fun. No, it is not, can we have some turbulence please, so they can be belted in, you bought a seat, sir not the whole plane, please sit down. See, I said, two pleases in this sentence, on this flight no one says please or thank you or anything polite.

Twenty minutes into the flight it is someone’s birthday and a cake is pulled out all squishy and mushed but the friends begin to belt out Happy Birthday to you and we are all supposed to be sports about it. After all, it is holiday time, cannot be a sourpuss, though you so much want to be.

Half a dozen newly-weds looking like newly-weds are sprinkled like glitter over the jam packed flight, and the lady behind me has turned up her mobile volume on full without earphones and her 12 year old son is doing much the same with his video game, and grumpy old me has to ask the hostess to ask them to tone it down. Haven’t they heard of earphones?

A man who has had too many in too little a time, now gets into an argument with the cabin crew because she wants dollars and he has rupees, and he cannot understand why it is not good enough and now he is getting belligerent and nasty and canvassing support from those around him. Then, this  guy gets up from in front of us and opens the overhead bin and the bag, a pretty large one, which was an accident waiting to happen, falls down on this guy sitting below it and he yelps.

A shouting match ensues and you would think the guy who opened the bin is sorry, but he is not, so the yelling intensifies and there has been a cascade effect because when the man the bag fell on yelled and jumped up, he knocked the elbow of a lady in Seat B who was drinking hot coffee and that spilt on her and on the lady in Seat C and both started screaming. It could not have been more farcical if the Three Stooges had planned it.

The singing of the birthday song ends and there is much sharing of the cake and offerings to those in the surrounding seats and a jammy, creamy chunk falls off into the aisle and this kid who has spent an hour zipping up and down squishes into it leaving a trail across the length of the plane. Thankfully, there is a burst of turbulence and the seatbelt sign comes on and the flight deck says belt up, but no one listens.

People line up at the toilet. Others just stand for the sake of standing and six buddies go into a game of Antakshari where you have to sing a song with the last syllable of the last song.