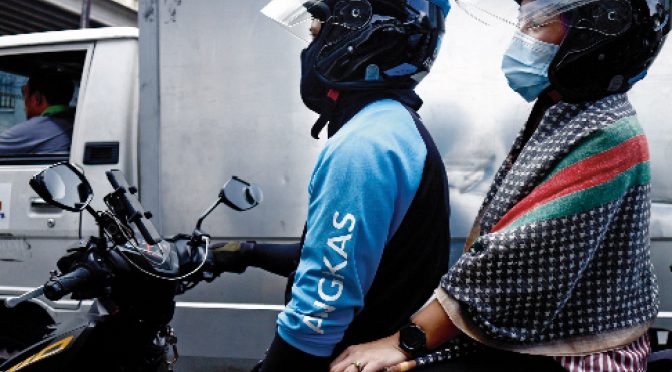 “Would you like a facemask sir?” The man asked me prior to us setting off to meet my partner who lives an hour away from my place. I turned down his offer and instead put on the helmet he offered, holding it as if it were the precious Crown Jewels – mindful of it not falling on the floor and having the rider look at me in disgust. Thankfully, it slid right over my head and contrary to the memes that the ‘bike taxi’ company put up on Twitter regarding sweaty helmets, I was lucky it wasn’t. This was my first time using Angkas – the Philippines’ take on Uber, the only difference –  instead of a car rolling up to pick you up, it’s a motorcycle.

Manila’s traffic situation, since the last five years or so I’ve been away from home, has become horrendous. Last year, a trip that would have normally taken me an hour to navigate through, took over six hours. During that journey, inside a cramped minivan, I was able to watch two full episodes of Chernobyl while the vehicle inched forward only a few millimeters every couple of minutes. You can imagine the time people waste when they drive cars in Manila during peak traffic hours.

It’s easy to see what created this frightful traffic situation. Though car ownership in the Philippines has  grown exponentially over the years, the roads haven’t been upgraded to handle the deluge of vehicles.

Statistics released by the Land Transportation Office (LTO) in 2018 revealed that registered vehicles increased by 11.4 per cent. A total of 7.5 million new driver’s licences were also issued that year – a 12.12 per cent increase from last year’s numbers. The ease of taking out car loans has only compounded the problem.

This is where Angkas shines. While cars get stuck in paralysing traffic snarls, motorcycles weave through congested roads with great ease. The bike service, which is offered to travellers via an Uber-like app, can be termed a modern-day commuter’s hero.

Using the service is simple. On the app, all you have to do is to select a pickup point and a destination and soon you’ll have a rider accepting your booking request.

A bike then pulls up, gives you a helmet to wear and off you zoom towards your destination. It’s comforting to know while you’re being whisked away to your destination, you can see commuters in cars languishing in the traffic gridlock.

“Our greatest strength is convenience and time,” informs the Angkas rider as we talk about how their service has made it easier for people to spend more time doing what they want to rather than waste time in traffic for unspeakable hours. There is truth, and evidence to what he says. Time is a luxury these days, so why waste precious five-hours on the road?

Weeks earlier, the app had come under pressure from the government as a new app entered the market.

According  to rumours, the new app  is owned by a public official who wants to monopolise the industry and limit Angkas’ growth. Pulling a few strings here and there and the app has since come under scrutiny for allegedly flouting public transport regulations.

Apart from that, the government is also looking to cut the number of Angkas riders by half –  if this happens, more than 17,000 people are in danger of losing their jobs.

The app, its riders as well as commuters have been staging protests against the witch hunt that has been taking place.

A similar story happened with Uber Philippines when the country banned it in 2017, leaving Grab as the sole ride-hailing app in the country. I hope that Angkas do not meet the same fate. It is an app that was born out of a need to offer more time for the average Filipino.

Elsewhere around the globe, such innovations would be lauded. But in a country mired by corruption, one could only surmise what fate this wonder app will suffer.

As I sit pillion on the Angkas bike, I blissfully watch the city’s skyscrapers and communities whiz past me. I see kids playing on the sidewalk, old women gossiping on the side street, and enjoy many other scenes which I would not have if I were sitting inside a car. In the one-hour ride, I heard Jeepney engines putter, horns blaring, the pungent smell of the Pasig River under the Guadalupe bridge, and of course that wonderful feeling you experience when the wind blows across your face as the rider speeds through the traffic at 60kmph.

I  look forward to using it once again when I go home on vacation because I’d rather spend five hours with the people I love rather than spend that time sitting in a cab twiddling my thumbs!

Keith likes to feel the wind in his hair when he’s riding a bike.