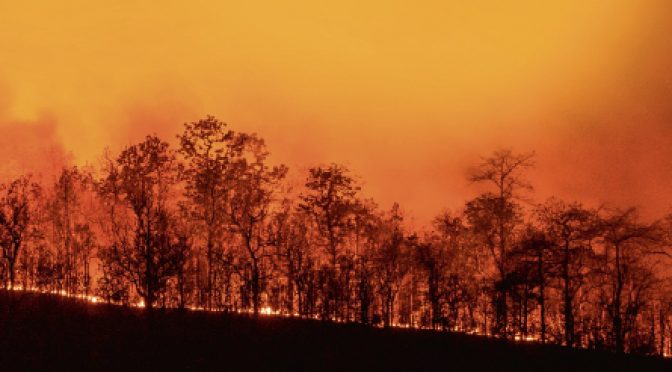 I am the type of person that doesn’t bother with New Year’s resolutions.

Not because I have trouble making one and then sticking to it, but simply because I don’t see the point of waiting for a new year to begin before promising to be kinder, more patient, and taking better care of my health. All of these are goals that you can set your mind on the moment you become aware of them. So, no big New Year’s resolution for me, but, maybe, just maybe, this is the year when I set a goal for myself — one which has developed as a result of various horrifying events around the world.

Even as people around the world celebrated and welcomed the new decade, my thoughts continued to be plagued by images and videos that I had seen coming in from Australia. Working in a newspaper means that you have what I can only describe as a front row seat to events as they transpire in real time. Earlier in 2019, we had watched in horror as fires ravaged the largest rainforest on Earth. Calls for action to save the Amazon rainforest, dubbed as the Lungs of the Earth, were quick to come, but a feeling of despair began to set in as efforts stalled. Experts estimated that the total number of fires in the Amazon in 2019 had increased by almost 80 per cent compared to 2018. Figures showed that more than 87,000 forest fires were recorded in Brazil in the first eight months of 2019 — the highest number since 2010. In comparison, 49,000 forest fires were recorded in the same period in 2018.

However, if the fires in Amazonia were a cause for concern, then it was nothing compared to what we were about to witness in Australia. Looking at the blazing infernos that have swept across the country since September last year, destroying everything in their path and turning the sky a nightmarish shade of crimson, you can’t help but think that the gates of hell have opened. Statistics put together by researchers have estimated that the fires have destroyed over 25 million acres in the country – this is seven million more acres than burned in the Amazon rainforest. Wildlife officials have also revealed that they fear that more than one billion animals are dead as a result of the blazes. By now, most of us have seen heartbreaking pictures and videos of fleeing kangaroos and injured thirsty koalas, which have served to drive home the point that there is a price being paid for inaction.

In the wake of both these events though, I still see a glimmer of hope. In one of my previous articles I talked about YouTuber Jimmy Donaldson, aka ‘MrBeast’, who promised to find a way to plant 20 million trees by 2020. Well, the online community came together to make it happen and in his tweet on December 19, 2019, he announced that ‘TeamTrees’ had crossed the 20 million trees mark. In 55 days, people from all around the world had come together and donated to the Arbor Day Foundation for the initiative. The trees, which will be planted over a period of two years, are estimated to absorb and store 1.6 million tonnes of carbon — this is the equivalent of taking 1.24 million cars off the road for a year. Donaldson was quick to say that the initiative was about more than just planting 20 million trees; it was a movement that showed that we care about the environment and that we want to make change. And all this brings me back to my decision to ink a New Year’s resolution this year. I have decided that I want to do more for the environment this year, and I am going to start off by planting more trees.

Rohma feels that Dr. Seuss’ The Lorax should be required reading in every school. More people need to speak for the trees.