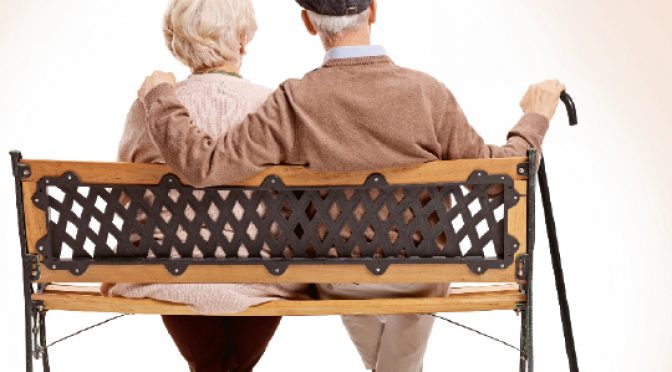 About a month ago a man brought his aging father to a charitable facility for senior citizens in New Delhi. He wished to admit his father and was ready to pay for it. It seems, he and his wife and kids were off to  the USA and did not want to take the old man with them. The people’s home refused on the grounds that it was open only for those who were indigent and utterly without any support system. ‘If you can afford to migrate to the USA take him with you’.

A few days later as dawn broke the father was left tied to a tree with a note explaining that there was no choice. He was ostensibly suffering from old age dementia and incapable of looking after himself and also had the habit now of wandering off and getting lost. Ergo, he would not fit into their new life.

Like an old shoe. No longer comfortable. A hole in the sole.

Then there is this old lady sitting on a bench outside the airport in the same city, her future echoed in every corner of the world. She is waiting for her son and family to collect her as they fly off to Canada. She has been waiting several hours until a kind policeman asks her what she is waiting for. She says, oh my son has gone in to bring the tickets, we are going to Canada. The police officer checks it out for her. The flight to Toronto  left three hours ago.

Now you might think that these are such absurd one-offs they cannot be seen as a measure of a new world. Perhaps not but things they are a-changing.

A doctor in a major hospital tells me it is very common to have elderly patients deserted on a hospital bed. What you do is leave Mum or Dad in a decent ward, salve your conscience by paying for a week in advance and then relocate or just walk away. Chances are the parents when discharged will have little idea where they lived or be aware of an address as such. In any case who will organise a search based on slippery clues?

How do people like this convince themselves they are doing the ditch because it is the right thing to do. Disowning parents, taking them to court over property and land, turning your back because it is inconvenient to have them around or they no longer bring anything to the table. These are no longer uncommon scenarios and the justification  comes easier than one can imagine.

Conjure up a sense of hurt and injury, tell yourself you are the victim of a great parental betrayal, employ the rivalry between siblings as your validation. They asked for it.

Largely the redundancy of mother and father springs from an absence  of stamina and a drying up of relevance and love. You do not need them anymore, they bring nothing to the table. In capsule, they are a nuisance and in the way. That love dilutes into duty which then sours into poorly concealed tolerance which collapses into indifference.

When the larger family concept still held sway there was back up and also a general social pressure to do the right thing till the last moment. Both pressures have disappeared or become secondary. In the context of  the nuclear family, it is so much easier to gradually phase out father or put distance where Mum is concerned.

They will be so much happier in a home with others of their age for company.

Parents in their dotage can be impossible to handle and here is a quotable instance where they are just mean and rude and belittling:

“I knew that our relationship was unhealthy, and it was creating massive amounts of mental distress for me by continuing to pretend to play happy families. So I moved away, but kept up the occasional phone call and sporadic visits home to tick the proverbial ‘familial duties’ box.

“But having children a few years ago meant that I felt an obligation to involve my parents in my life. I wanted to give them the opportunity to try and make things right with the hindsight and delight of becoming grandparents. I really thought that my children could heal things between all of us.

“I was wrong. If anything, the positivity and truthfulness that my partner and I model for our kids, and the closeness that we have, seemed to trigger the opposite reaction. There was an increasing sense of belittling that started to happen in front of my children, and the same cycle of manipulation and lies started anew.

“But the trigger point came for me when my daughter, after observing me with my parents on a recent visit said, ‘Your mum and dad don’t like you very much, do they?’

“It was like a light-switch turned on inside me. Why was I subjecting my own close-knit, supportive loving family unit to people that were continuously negative, critical, and dismissive of me? It stopped there and then.

“The social stigma of creating a zero-contact relationship with parents prevents many from doing so. The sense of guilt, abandonment, and judgement that can come from making such a massive decision can, and will, invite all sorts of comments from other people.”

The question then places itself on centerstage: Can you stop loving them, a sad state in which they have also played a part by never showing respect and seeing their child as an adult?

And is it this impatience in a 21st century generation that makes it easier to walk away and then find comfort in a growing tribe of similar minded people?

Whatever the provocation, it is happening  a lot more and Mum and Dad have increasingly become expendable commodities, more’s the pity.