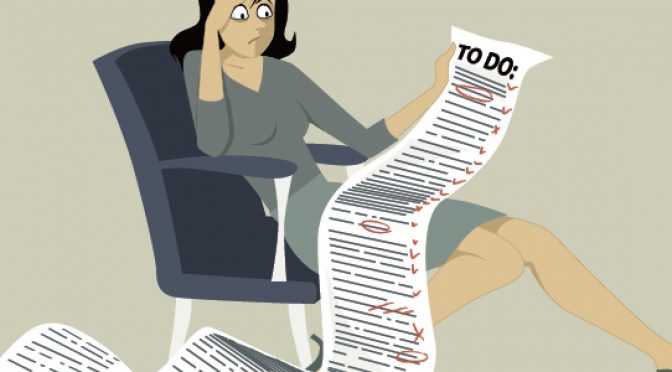 The phone beeps. Alarms remind me of tasks I need to accomplish. Little yellow post-its stuck on the walls scream at me – buy veggies, do the laundry, finish editing, call the plumber, go to the gym. Just thinking about things I need to do makes me break into a sweat. My heart starts pounding. Just then, I hear the husband call out to me. Phew! it was just a dream, but a very sticky one I must say.

We are almost nearing the end of the first month of the New Year. By now, most resolutions would have been probably forgotten (if you’re going as per plan, then you’re doing a great job!) and the diary, where you’ve noted your to-do list for the year, is probably resting somewhere in the depths of your study. I can’t speak for anyone else, but for me, and the story of my life.

There is no doubt that to-do lists are great. In fact, a self-help video that I watched recently, cited that it’s a habit followed by most rich people. After all, maintaining a list and sticking to it isn’t too difficult to achieve. Especially when it’s to do with money matters.

Despite all benefits, I must confess that I have a love-hate relationship with this so-called agenda of the day or the year. I agree being organised and having a plan in place is great, but the feeling of not being bound by or being accountable to a list is truly liberating.

These notes with their little checkboxes haunt me if I haven’t ticked off all the tasks by the end of the day. I must also confess that striking off a task is very cathartic. It gives one a sense of accomplishment and satisfaction.

But there’s a flipside to this as well. What happens when lists turn into an obsession? I know of someone who swears by this productivity tool. For her to-do lists, she invests in special graph paper notebooks, buys stationery from a certain brand, has premium versions of countless apps and also has a colour code for every completed task. Aren’t checklists supposed to reduce anxiety and bring some sort of order to life? Just thinking about what this ‘organised’ individual has to undergo to maintain her to-do list is enough to set off fear in me.

This specimen isn’t a one-off, I know of others whose lives are also consumed by lists. A handful manage to strike off every task, while others are simply overwhelmed with the number of incomplete chores on paper. This often leads to performance anxiety and guilt. I assume goal-oriented people find this method works for them as life is generally getting busier these days, and lists benefit them greatly as they are able to accomplish more than they would otherwise.

Now, while most of us let these pesky pieces of paper rule our lives, do I feel left out? Hell no! I do not want to be a victim of to-dos. Instead, here’s what I plan to do – prioritise, set realistic goals and most importantly, live in the moment rather than sit worrying about the things I have to do.

Delilah has taken an oath to not let to-do lists ruin her life.