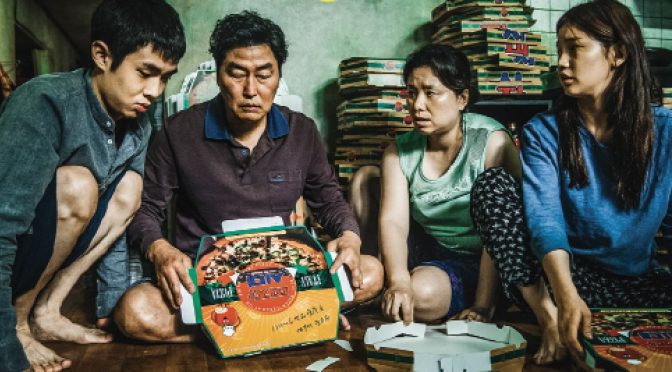 Of all the blows Parasite delivers to its audience, the fiercest is a scene where a rich employer complains about the foul smell that comes from his driver’s body. Overhearing this, the driver sniffs his arms to understand if the stench is for real. Living in an underground shanty where intoxicated passersby unburden themselves, this stench is a reality of his world. To his employer, however, it defines his being.

What cannot move you can make you stranger, and privilege does that to even the best of us. Bong Joon-Ho’s Oscar-nominated film Parasite is a critique of a system where the poor often find themselves unable to rise above their social realities. Which means if you’re expecting an easy-breezy time at the theatres, this is not the film to watch, for it demands an appetite for introspection. The plot revolves around a poor family in Seoul tricking their well-heeled employers, the Parks, into hiring them for various jobs in their household, all along hiding the fact that they’re related to each other. Humour is not absent, a lot of it coming from watching the family navigate their way through their wealthy employers’ idiosyncrasies. And yet, the plot punctures any sense of comfort when the Kims discover a stranger living in the basement of the mansion. The Parks have been blissfully unaware of this stranger’s existence; the one time their son saw him while he was coming upstairs to get food, they imagined he had seen a ghost.

What else can one be when they spend an entire lifetime in the basement of a mansion, one may ask. And yet, the promise of daily bread and shelter can be more alluring than sunlight and freedom. The basement of the Parks’ house is not periphery; it becomes a haven for the poor in Parasite.

Its nomination for both Best Picture and Best Foreign Language Film is a rare feat for a film that’s non-American. And yet, it is important to understand the need to blur these lines as far as the arts are concerned. Though it is set in Seoul, the film explores a human condition and revolves around a theme that the world is grappling with — class inequalities. Parasite may as well have been set in India or South Africa, and would have come across just as real.

Watching the film is bound to inspire curiosity about South Korea. Incidentally, it is not the worst example of income inequalities — the rich in the country earn 5.3 times more than the poor, far from the dystopia a viewer would imagine it to be after watching Parasite. To give a perspective, close to two million people in Brazil are believed to live below the poverty line. In the US, the richest 10 per cent now constitute 70 per cent of the country’s total wealth. So, why is South Korea a contextual setting for Parasite?

Ever since its worst financial crisis in 1997, South Korea developed its cultural capital. From K-dramas to K-pop to K-beauty, the K-wave has acquired a global footprint. While its economy may have seen considerable recovery from that time, it has also posted its lowest growth rate last year. In the light of these changes, perhaps the film is some sort of a reminder of what statistics and numbers do to people on the ground. Writing for Bloomberg, David Fickling echoes the reasons behind this anxiety of class inequalities, “South Korea went from poverty to affluence in the space of a generation, but growth increasingly appears to be grinding to a halt. That’s leaving many people terrified about what’s coming next.”

Parasite is not a product of a bleak world. Rather, it is a reminder of how that bleakness plays out in the lives of those on the ground. It holds a mirror to our collective past, present and future.