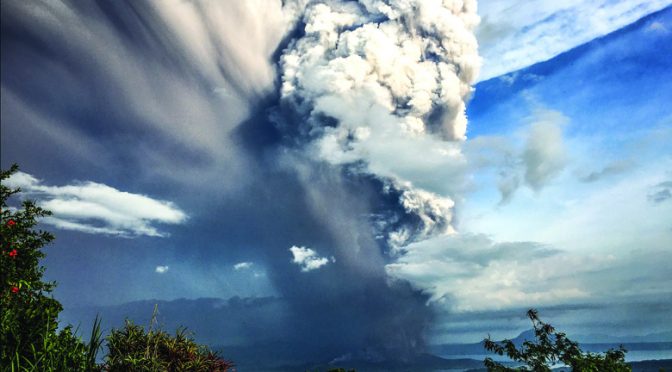 Apart from cars and bikes passing by every 15-or-so minutes, the only sound you would hear at 5am in Tagaytay in the Philippines is of the wind. The vacation town, famous for its view of the majestic Taal Volcano, had not woken up yet, but the lights of some establishments remained wide open — as if they never needed to sleep. Puddles formed on the cement walkways leading up to the polished floors of our hotel -— which boasted a balcony with a view of the restive geographical ‘marvel’.

That was during a trip in August last year, when I found myself gazing in awe at the Taal Volcano, despite it having been a childhood fixture. As a child, I remember our family taking a one-hour drive to Tagaytay every year on January 1 to celebrate the day. At the risk of sounding insensitive, the volcano still remains a beautiful fixture of nature for me.

But if there’s anything that I have learned from the recent violent eruption of Taal is that the volcano can be a double-edged sword.

On January 12, the second most active volcano in the Philippines erupted. In the aftermath, schools were suspended as far as Manila, flights were suspended at the international airport and the coastal towns around Taal Lake were evacuated — Tagaytay included.

Learning of the cataclysmic event and jumping onto social media, I saw photos of Tagaytay covered in ash. The once multi-coloured roofs of the town (a result of both paint and rust) were now a unified grey. My ‘August’ balcony view of the Taal was now coupled with a plume of smoke rising from the volcano accompanied by lightning storms. The 43-year-old giant had finally woken up.

Taal’s eruption was the first that  I’ve known in my lifetime. I had visited it a few times before moving to Dubai. I remember going to a country club which bore the name of the famous volcano. Winter flowers bloomed around the club’s exterior, making for great photos with it in the backdrop.

As a ‘single’ 19-year-old, I remember how the Taal calmed me down then, and how excited I would be to go on a zipline shouting all sorts of vernacular slang.

Fast forward to when my partner and I visited Taal; it filled us with joy as we indulged in impromptu photoshoots beside the volcano.

So why am I recalling these memories? For one, a part of myself believes that once the wounds heal and Filipinos have recovered from Taal’s eruption, everyone will once again return to their homes and restore the place to its former glory.  We Filipinos are resilient people after all.

The volcano has erupted for sure, but once the ‘giant’ goes silent, the place will get noisy again. Months down the road, holidaymakers will once more return to Tagaytay to see Taal in all its beauty. The famed volcano is no longer a textbook tale that my generation read, it’s a part of our personal history.