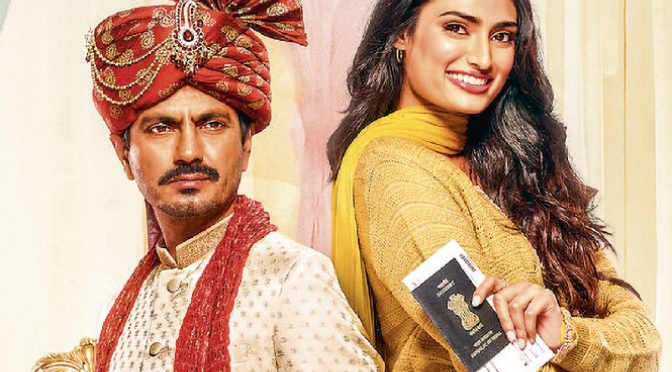 My interest in watching the  Nawazuddin Siddiqui and Athiya Shetty starrer Motichoor Chaknachoor had been building up ever since I saw promos of  the Hindi movie on TV.  The film was released last November and it was a busy month for me, hence I could not watch it on the big screen. I was patiently waiting for some kind soul to upload a ‘watchable’ print on YouTube. But to my luck, Netflix announced that it would be streaming the movie.

While waiting for the movie to be screened, I decided to check out what reviewers and critics had said about the film.

I was disappointed to read that leading media houses in India had very conservatively given the movie only two to two-and-a-half star ratings. One particularly disturbing headline caught my eye:  ‘Even Siddiqui can’t salvage this unfunny film’.

I liked what I saw in the trailer, so why was everyone trashing the film? This question was left unanswered until I saw the film. Watching the first few reels of the movie was enough to change my opinion of the reviewers in question. Did they even understand the movie, or were they stooges for production houses?

Contrary to their verdict, I was thoroughly impressed with the movie. I loved Shetty’s work and also Siddiqui’s grand display as Pushpinder Tyagi, a man desperately seeking a bride. Siddiqui, who is known to be a chameleon when it comes to getting into his characters, shared a  wonderful screen chemistry with Shetty, and it is evident throughout the movie.

The movie has Bhopal, Madhya Pradesh as a backdrop, and the duo have got  the ‘Bhopali Bakar’ accent right. The other characters in the movie did a tremendous job too. I found the Tyagi family very interesting, all the characters in the family are a reflection of suburban India.

It was a perfect family entertainer and I watched it more than once with my kids, who enjoyed it as well.

I am not saying this because I am a huge fan of  Nawazuddin Siddiqui; in fact, I also liked the direction and the effort the entire cast had put into the movie.  A special mention to Shetty who held her own against a powerhouse actor like Siddiqui.

Though the movie ticked all the boxes for me, I have completely lost faith in movie critics. Moviegoers, who wholeheartedly trust reviewers and their ratings, must have surely given a gem like Motichoor Chaknachoor a miss.

I beg to differ. For me, Motichoor Chaknachoor falls in the category of  those epic movies made by the great Hrishikesh Mukherjee in the Seventies, like Gol Maal and Chupke Chupke, and other family entertainers.

My kids loved the movie despite the language barrier (being brought up in the UAE, they’re not fluent in Hindi), but they were following the movie through  subtitles. I will never ever take media ratings of a movie seriously. If you like an actor’s body of work, watch their movies, let no one tell you otherwise!

I wonder why Motichoor Chaknachoor was treated so badly by Indian media outlets. It will always remain a mystery for me.

None of the views expressed by movie critics impress Sandhya.