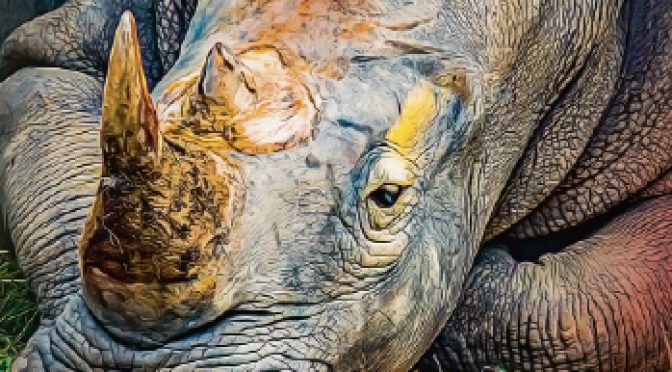 Somebody bought a regal-looking African grey parrot that for a long time stood sentinel at the escalator of a Jumeirah mall. Whenever we went shopping or to a movie, we would stop to say hello. He or she has gone now, leaving a visual void. Sad. But sadder still, that’s because of the market for these beautiful birds and their captivity that they’re now in the running for a place in the endangered species stakes. Lowest estimates put them at only 600,000 odd left.

Even when we would stop to ‘chat’, my heart went out to the loneliness in the eyes, a sort of abject surrender, never to see the Savannah again. Or the wind under its wings.

The world’s wildlife have the right to share the planet with homo sapiens. But we seem determined to eliminate them from the equation in an absurd and cruel massacre of the senses.

87 Elephants Killed by Poachers in Africa’s Last Safe Haven; Vietnam’s Frog Delicacies Put The Species In Danger; 19 Kangaroos Murdered In NSW Crazy Hit And Run Frenzy; Over 10,000 Camels To Be Shot In The Outback. These are modern-day headlines. Between mindless cruelty, which starts at an early age with a can tied to an animal’s tail, hunting for trophies not food and the poacher per se, we are now looking at 50 per cent of all species unlikely to remain on the planet by 2050. That is revolting but true — and made worse by the plunder of the animal habitat.

Much of the reason can be traced to a total disregard for animal life in the last  century and a handing over of values to children, that animals can be troubled, tortured and injured for fun. Domestic cats have been the most abused pet, often destroyed for a lark. Deliberate roadkill was long accepted as high jinks. While in the past decade there has been a salutary turnaround and a new awareness plus the advocacy for more kindness and humane treatment even in the food chain, for many wondrous animals, it might well be too late.

Elephant numbers have dropped by 62 per cent over the last decade, and they could become extinct by the end of the next decade. An estimated 100 African elephants are killed each day by poachers, leaving only 400,000 remaining. The Bengal tiger tops the ‘goodbye, cruel world’ list. Wild populations of African grey parrots have been greatly reduced due to pet trade, destruction and fragmentation of their habitat. It is estimated that the populations have decreased by over 50 per cent in many areas.

Some time back, the  South African government made desperate moves to save the two-horned rhino from extinction after it woke up to the fact that poachers in the Kruger National Park had decimated the species. The revival of big game-hunting for making money, and the queues of the rich and callous who find joy in killing animals for fun rather than food, now threatens to wipe out other animals. One still cannot understand how Zimbabwe sent an “it’s okay” message when it dropped charges against an American dentist who killed Cecil the Lion, who was a much-loved mascot of the country.

See the result. The largest elephant in the country was shot dead by a German hunter who paid $60,000 for the dubious privilege of killing this magnificent beast at a time when scientists are attempting to study elephants to discover why they do not get cancer and what gene they have that could reduce mortality in humans. Since the hunter’s papers will be in order, he can ship the head back to his country to taxidermy it and hang it on a wall. Not only is it an obscene amount of money for an obscene act but the sanction by a government is incomprehensible.

Perhaps one can appreciate the need to cull herds and cover the bloodthirst with the comforting label of “sport” and turn it into a commercially-viable option but when animal icons like Cecil the Lion and this giant elephant are cheerfully targeted, you know there are no rules left. If someone does not end this bloodspill for big money and there is no control, many a species will disappear. There are now 50 of them on the critically endangered list including leopards, tigers, gorillas, turtles and rhinos. Add to that the greed for pelts, the red seas that churn post whaling and the clubbing of seals, the so called sports like bear baiting, cock fighting, goat throwing, mistreating animals in circuses and zoos, dog and bullfighting, just to name a few.

The message needs to go out loud and clear — animals are not our possessions to wear, mock or be hurt for our entertainment.