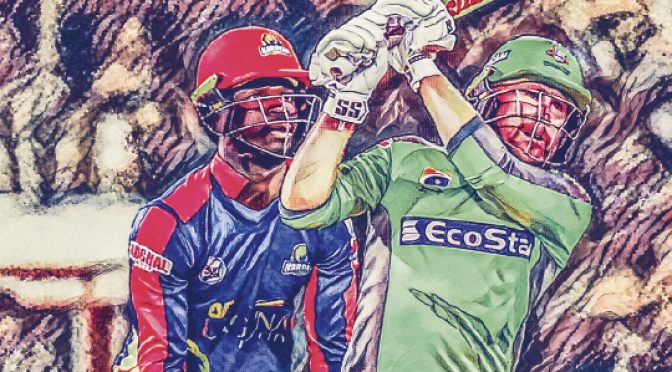 Cricket is an essential part of almost every Pakistani household. You may run into one or two odd ones from this part of the world who might say that they have absolutely no interest in the game. Nevertheless, cricket is a sport that has been known to bring productivity in offices to a complete standstill. It is also known to bring absolute chaos and pandemonium to a household — as I found out while watching the ongoing Pakistan Super League (PSL) matches on television.

I would like to think that every family has a certain quota when it comes to things like drama and antics; you can usually get a front seat view to such incidents at our weddings. However, the PSL cricket matches have blown the limit meter right off the scale.

They call cricket the gentleman’s game, but let me put it this way, there is very little that can be considered civilised in a home where you have several members of the family screaming insults at the TV when a fielder from the team they are rooting for drops a catch.

Many fans call this a part of the complete sports experience, but I think they might be hard-pressed to find a household where members of a family are rooting for different teams. That’s exactly the case with my family though.

To start with, we have my dad, who is a staunch supporter of the Quetta Gladiators. My mum, on the other hand, favours the Peshawar Zalmi. Yours truly likes to spend her days proudly wearing a Lahore Qalandars t-shirt, while my brother likes to keep things interesting by throwing in his lot with the Islamabad United team.

So, what happens when four members of a family sit together to watch a PSL cricket match? I did mention something about chaos earlier, but for those looking for more colourful descriptions, here’s the thing — battle lines are drawn, war paint is applied, old secrets are unearthed, and evil cackles abound.

Anything and everything goes, nothing is off limits, and all of this is in the name of a sport that comes to us as naturally as breathing. For anyone wondering how the family survived this difficult period, the answer is… practice.

This is the fifth year of the PSL tournament, and by this time, there is precious little that has the power to faze anyone in the family. If anything at all, we have all begun to enjoy and gotten creative with our trash talk during the matches.

But, beyond friendly family rivalry, the best thing about the PSL matches is how much fun it is to discuss the tournament with people from different walks of life.

I often have  in-depth discussions with taxi drivers, bus drivers, and even the servers in my office canteen about the strength of each team, their best players, and what best to call a guy who drops a match-winning catch.

If anything, the PSL is a wonderful reason to celebrate all the amazing things about a sport and the country that loves it so dearly.

Rohma’s team, the Lahore Qalandars, don’t have the best track record for winning but they have heart