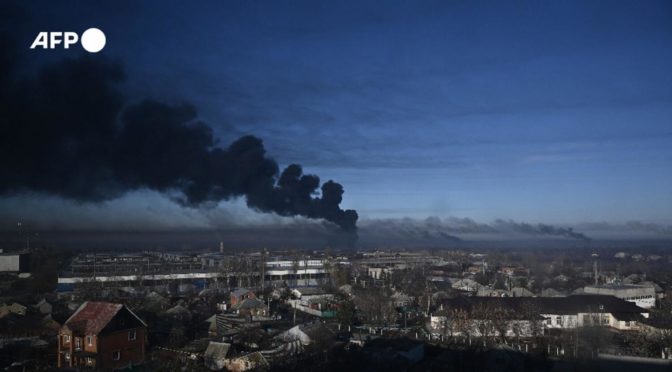 Russian forces on Thursday fired missiles at several Ukrainian cities and landed troops on its south coast after President Vladimir Putin authorised what he called a special military operation in the east. Explosions could be heard in the pre-dawn quiet of the Ukrainian capital Kyiv. Gunfire rattled near the capital’s main airport. The action prompted suspension of flights and roiled global markets. Oil, gold and silver prices have surged.

12:27: Ukraine’s Zelensky orders military to ‘inflict maximum losses’The head of the Ukrainian military said Thursday he had received orders from President Volodymyr Zelensky to repel a Russian invasion of his country.“The supreme commander the Armed Forces of Ukraine gave orders to inflict maximum losses against the aggressor,” Commander-in-Chief of the Armed Forces of Ukraine, Major General Valeriy Zaluzhny said.

“We are calling for the air space, Bosphorus and Dardanelles straits to be closed. We have conveyed our relevant demand to the Turkish side. At the same time, we want sanctions imposed on the Russian side.” – Ambassador Vasyl Bodnar